The mission of the Taos Chapter is to make breastfeeding normal. We meet at 12:30 on the second Tuesday of every month at the Tiwa Babies office on Taos Pueblo, at 210 Rotten Tree Road, in front of the Community Health office. To get there, take a right at the stop sign as you approach the main entrance to the Pueblo Plaza; pass the Pueblo Day School and Community Gym on your right; the next building on the right is Tiwa Babies – a new trailer home. You may be asked to stop at the little guard booth before the stop sign as you approach the Pueblo – just let the guard know you are going to Tiwa Babies.

The Taos Chapter is involved in the following activities:

Latch On: our sister organization, is a meeting of service providers to nursing mothers; it meets directly before the Task Force chapter meeting, at 12:00 noon at Tiwa Babies.

Café con Leche: a support group for breastfeeding mothers, meets on the third Thursday of the month at the First Steps office at 413 Sipapu St. at the corner of Salazar, across from Taos Physical Therapy. It is moderated by Jana Bailey, our IBCLC and Director of Taos Center for Breastfeeding.

We are also engaged in reaching out to local businesses to become breastfeeding-friendly, and we are working on convening a roundtable discussion with local pediatricians to increase their knowledge of breastfeeding resources and alternatives to recommending formula when a baby fails to gain weight at the desired pace. 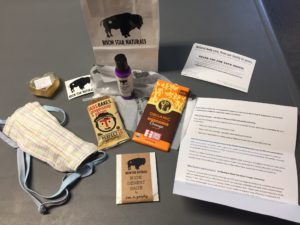 We thank Muralist Lynnette, Haozous, pictured here, for her beautiful and honoring mural.  Lynnette Haozous is Chiricahua Apache (of the San Carlos Apache Tribe), Dine’, and Taos Pueblo. Growing up on and around her three tribes’ reservations in Arizona and New Mexico has influenced Haozous’ artworks. 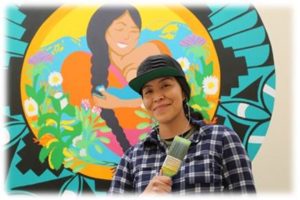