When we heard about the MIT’s Make the Breast Pump Not Suck Hackathon, we knew we needed to represent New Mexico. Knowing the importance of breastfeeding in reproductive justice, we approached Rachael Lorenzo of Indigenous Women Rising to organize a team. Along with Malia Luarkie (Laguna Pueblo and an organizer with Indigenous Women Rising), Marya Errin Jones (ABQ Zine Fest), and Monica Esparza (NM Breastfeeding Task Force), Rachael organized an intimate community gathering of Pueblo women who wanted to share their past breastfeeding experiences. With the ultimate goal of making traditional dresses more breastfeeding-friendly, the discussion included stigma against teenage parenting and breastfeeding, how to normalize breastfeeding in a traditional way, body image, boundary-setting for children, sexuality and gender, and what the women wanted out of a traditional dress when they breastfed. 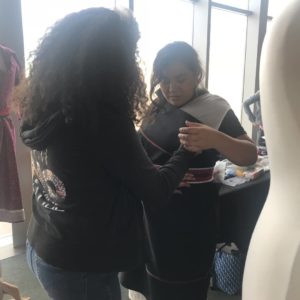 Using this feedback and knowledge, the team worked with two seamstresses to create dresses that enable women to participate in sacred ceremonies and the sacred act of breastfeeding. During the Hackathon last week, one of the prototypes was re-hacked to make the breast more accessible and comfortable for both mom and baby. The team was awarded the W. K. Kellogg Foundation Healthy Communities Award for their innovative designs.

Rachael and Monica discuss their experience working on the project below.

When did the idea of re-inventing the traditional dresses first strike? Was it gradual, or a lightning bolt moment?

RL: This has been a thought for years for me—I had my daughter in 2012 and I wanted to participate in my religion with her and I never thought to ask about modifications for breastfeeding. In 2015, when I had my son, I knew something had to be done, and 2017 was the year to make it happen.

ME: I came on board as a consultant to the project with my expertise in working with New Mexican breastfeeding families. During one meeting, Rachael showed me a dress that was her grandmother’s and had a cut down to the belly button, I pointed out that it was probably done to access the breast easier for a breastfeeding mom.

There’s a line in the article that says “I often found myself hiding in my car, lifting up the layers of my traditional dress during ceremonies. If I didn’t have the time or a somewhat private place to undress, I stayed at family members’ home to breastfeed or pump. I did not get a chance to pray and participate with my partner and our new baby the way I wanted to, the way I felt I needed to, to feel whole.” Can you tell me about a specific time when you were having to navigate breastfeeding and ceremonies?

RL: There was a ceremony in January of 2013 during which I had to walk outside with my daughter to my car, put her down (and she cried), undress, feed her for fifteen minutes, and re-dress. I did this a few more times over that weekend in January and again during the year throughout other ceremonies. By September of 2013, I decided to stay at an in-law’s home during the ceremony so I could feed my daughter.

ME: Our marketing team member Marya was crucial in developing the language to communicate and ensure that people saw and treated the garments with the same respect and honor as regalia from other cultures. It is not something that we, non-Laguna Pueblo people, get to wear, touch or buy for it is a sacred living history of the Laguna Pueblo people and thus should treated with respect. And yet, how do we market something that is not meant for the public? The thought is to bring awareness of the importance of supporting breastfeeding families in all aspects of their lives and the importance of lifting up supportive models that can bring back our internal knowledge and breastfeeding tradition and to dismantle the stereotypes of Indigenous people.

RL: I agree with Monica—Marya helped us articulate to hackathon participants and observers what the meaning is to us, as Pueblo women, and how to find common ground with people who are different from us when it comes to breastfeeding. Her help in developing a message that we can all identify with made me grateful for her work on the team and helped us make this project a success.

I’m curious about the experience of motherhood for indigenous women. Is it a routine part of life, a right of passage?

RL: Motherhood for our people is celebrated—there’s a new life. But it’s not often I hear those hard conversations about breastfeeding, healing after birth, mental health, or any of the difficult things that come up after a baby. Part of why we wanted to move forward with the project was to open up these conversations in a respectful way.

I know you recently presented the designs to the Laguna community. Will you be reaching out to the other pueblos and tribes? Is it only for indigenous sisters or do you want to see other women wearing their garments?

RL: These dresses are only for Pueblo women. Pueblo people throughout New Mexico have very similar clothing and it is not uncommon for us as Laguna women to ask other Pueblo women from Acoma or Santo Domingo, for example, to make us a dress or a manta (another layer of traditional dress).  There has been discussion of a dress that anyone could wear without being culturally appropriative—cultural appropriation is something we are vehemently against. Like Monica said, we want to show other indigenous communities what we did and how they can do it too.

RL: Interested Pueblo women and people may contact me at indigenouswomenrising@gmail.com or 505-918-6411.  I can connect them to the seamstresses or Pueblo seamstress can reach out and see how they can make these dresses for their own community.

ME: Rachael has mentioned that it has been well received with in the Pueblo community and the seamstresses are receiving more orders.

I can imagine women in other cultures have similar stories and parallel barriers. What words of advice or encouragement would you offer?

RL: I would say to be brave. If it is a need that must be addressed, you have generations of women behind you who modified clothing, food, housing, among many other things, to work for themselves, their babies, and their families. Do it with a good heart, with good intentions, and start small. Have conversations with the women in your family around the dinner table and talk about it the problem you’re facing. Until you speak up, you may not know someone else is struggling with the same issue.

ME: I hope that this project empowers women from all walks of life to reconnect with what we historically know to do and something that was taken from us through colonization. That we continue to see the culture shift where breastfeeding is normalized in such a way that it is incorporated in everything we do.